Go Ahead: Judge My Book By Its Cover!

It's been a busy month here at The Little Office. The last couple of weeks while we/I were supposedly on vacation with the in-laws, auntie, uncle, and cousins/nieces, I was steadfastly checking out dozens of collage artists' websites. I had no idea how many of them were out there! After a week of diligently sneaking every free minute possible to search cyberspace high and low, I came across a collaged image on an old-fashioned playing card by one Felicia Piacentino. When I saw it, I let out a gasp. Why? Because "Planetary" pleasingly and perfectly presents the three main subjects of my book: the trifecta of cosmic wonder, baby-making/rearing, and spirits/saints/gods/goddesses. I was so happy to finally find a work of art that really says: go ahead, judge this book by its cover, cuz you're about to read poems that deal with all three, sometimes all at once. 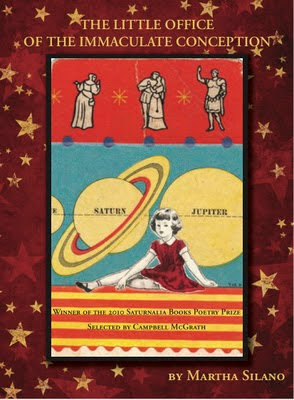 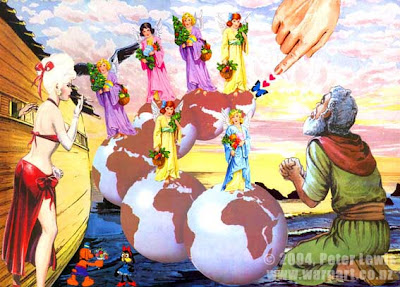 Send Me An Angel

This one is by Peter Lewis, a collagist near and dear to my heart. So funny! But a little too bonkers for my somewhat/at times serious book.

And "Reach Out to the Stars," another by Peter Lewis, which it turns out was featured in a show called "Gravy," which happens to be the title of the penultimate poem in The Little Office--but alas, there aren't quite enough aliens in my book to warrant this: 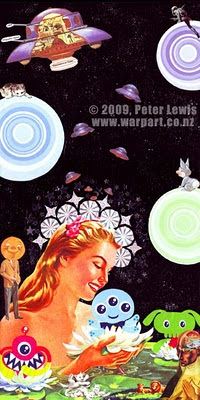 And then there was Marty Gordon's work . . . 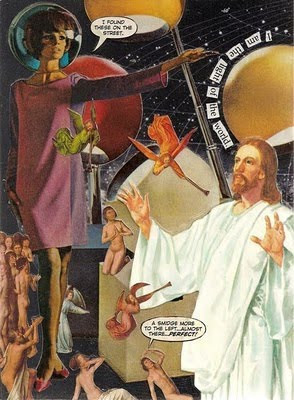 This image I also loved, but again, just a tad too kooky for the gravitas aspect of this collection. I also loved: 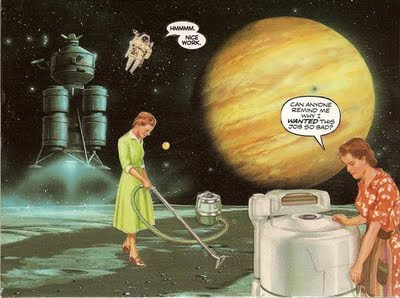 I also liked this one by Edith Vonnegut, but it was a tad on the busy side, and perhaps contained a few too many female figures: 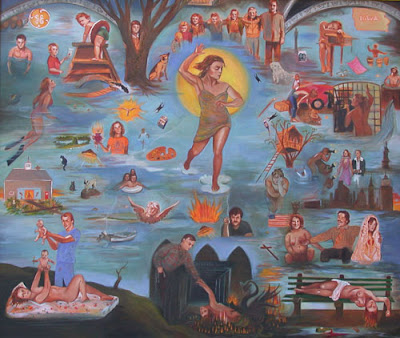 Story of My Life

Finally, Lou Beach's "Collage with Key and Door and Eye" There were a few others, but these were the ones I kept going back to over and over.

Once I chose Piacentino's "Planetary," I contacted her (fingers crossed) to see if she would let me use a digitized image of her fine work x 1,000. What a relief when she said yes! I also purchased the original art work (playing-card sized) to frame and treasure for eternity.

Thanks, Felicia, for agreeing to let me use your work, and to Henry Israeli, my editor at Saturnalia, for being patient and helpful with suggestions and advice as I conducted my World Wide Webby search.

Now onto the final editing of the manuscript . . .
Posted by Martha Silano at 11:53 AM

Congratulations on your book and its gorgeous cover. And thanks for all the collage art!

Thanks, Kathleen. It was great getting acquainted with so much great art out there. Felicia is "catwalk" on etsy.com--she has so many great collages!

It looks perfect! I enjoyed seeing the other pieces, but the one you chose is so fabulous. (Now, waiting to read the poems!)

What beautiful art--I can see how it would be hard to choose. I love the cover, and would buy the book, based on the cover and title, even if I didn't already know your work.

Oh, my! I am in love with this cover. Thanks for sharing. Can't wait to hold the book in my hands.

it's a great cover!

Oh my goodness, you've already got your cover! It's a beauty. Just perfect. I also loved the last one, very surreal, but think you chose the one that best fits your book and title.

I'm so honored to have been chosen for the cover of your book, which I can wait to read!
Thank you for all the kind words!
Felicia

Thanks, Diane--I was pleased to find a piece of art that's both gorgeous and fitting!

Felicia: I am thrilled to be using your work!! Thanks again for letting me.