It was Kelli's idea, of course. We were sitting in a cafe, most likely. It was probably the day we spent four hours in a crowded Starbucks because we were too involved in conversation and generating new work to bother moving our bodies elsewhere.

How about we write a book of writing prompts, Marty? We make them up all the time anyway - why not share them with the world?

I just wasn't sure. Could I really come up with 183 writing prompts?

It was sometime around early 2010. My kids were five and nine. I had a full-time teaching gig, and then there were my own poems. As it was I barely had time for those three very important jobs. Did I really have the time to come up with bushels and bushels of exercises?

We divided up the months and got to work, making December 2010 our first deadline: the halfway mark. We would meet at a nearby retreat center on an undisclosed island to share what we had so far -- then spend some time testing out our po-recipes!

By some miracle we both met that December deadline, spending a productive week in collaborative sequester. We sat at the dining room table with the electric fireplace flickering away, listening to the ferries (and the float planes) come and go. In the kitchen Kelli had erected a Shrine to Chocolate. Stacks of dark, milk, and red-hot chili kept us fortified. When the chocolate gave out, it was canned soup, fresh fruit, and a Mr. Coffee that wouldn't quit.

It took two more years to get the other three months finished. For me it meant that I spent the summer of 2012 writing an exercise a day.  [Don't ask me what happened to 2011!]

2013 was the year of editing. We wanted the entries to be clear and succinct, and we also wanted them to cover as many bases as possible: a subject, a trope, words to include, excerpts from sample poems, formal elements, extra credit requirements (we love extra credit).

All of this meant lots of reading and re-reading, And testing. And more chocolate. And more trips to Starbucks.

Along the way, I never gave it a thought that a day would come when the book would be finished. All I thought about was what had to be done that week: I have to revise the pantoum exercise,  or I have to send that permissions request to Ellen Bass.

It's nice to not have to dig down deep to write more exercises (I honestly don't think I have another prompt in me!), but I am revved up more than ever to create new work using our exercises.

Here's the exercise for November 5, just in case you want to play along:


Three-Ring Circus
Write a poem in the form of a three-ring circus—create three sections each with something unique happening in each section.  To help the poem stay connected, have a word, color, or unique phrase reappear in each section.   Make a list of three events that seem to have nothing to do with each other—playing tennis in a field of wildflowers, memorizing the moons of Jupiter, and taking the subway to work—and write a poem that connects them.

If you do write a draft using this prompt, please share it in the comments section. If you want to get your hands on 365 more writing exercises, consider purchasing a copy of The Daily Poet. 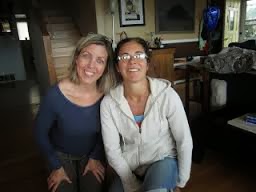 Posted by Martha Silano at 9:35 PM

I love your book. I love that the prompts make you think... they aren't just fluff. :) I can't wait to get started writing!

Thanks, Kimberlee! I hope the prompts yield many wild fruits.

This was a fun exercise. Susan

Creatures of the deep
Float -
A Bollywood dance
In seaweed
Mark Morris under water
Neptune roams
Children shriek
“Can you put Moon jellies on toast?”
I hope
For the deep
Instead, tired phrases
Make their way
With knowing nods
Polite applause
Accessible - yes
I feel cheated
On the 405 at LaTijera
Drive slows
Intimate crawl
My car hugs a Lexus
With a sports bra
Oblivious to the road
Sunk in deep twitter
#//Moon jelly cheated

Hi Susan,
Thanks for posting your poem! I especially liked "My car hugs a Lexus / With a sports bra ..." Excellent!