During this season of giving consider giving poetry books purchased from local book sellers or directly from the presses who published them. 2013 was a banner year for poetry. Here are just a few of my favorite new releases:

The New York Times recently featured Kasey Jued's poem "To Swim" on their ArtsBeat page, which is how I first found out about Kasey's work, along with her amazing new book, Keeper, winner of the 2012 Agnes Lynch Starrett Poetry Prize from University of Pittsburgh Press. Kasey's work appears to be autobiographical, that is, it shares images/memories from the speaker's childhood, but her work is also very much NOT about her own personal "abouts" - it's about the abouts of owls, dogs, bees, rain, and blackberries, which under her spell become somehow holy, become something equal to God. Two of my favorite poems in the book, "Race Track, Hialeah, FL" and "Skin," are about racehorses and sharks, respectively. I love how, in "Race Track, Hialeah, FL," we are given the metaphor of the track's green center "like a place on paper / where, years later, I'd set / my compass tip, careful / to make my circles concentric, / meaning they shared a heart." WOW! I also love, in "Skin," this conversation going on between two kids: "My friend / said even the skin of a shark / could cut you: under its silver / a million tiny blades." These are poems exquisitely calm and full of reverence for the natural world, brimming with creatures of the wild worth paying attention to. Puns be damned: this book is a definite keeper.

Stag's Leap: I was told it would be a good read, but I did not know it would be this good. In a long career with many, many excellent poems/accolades to her credit, Olds has written some of her best poems in this volume cataloging the unanticipated breakup from her husband of thirty years. The voice of these poems is by turns elegiac and angry, victorious and downtroddingly wrecked. There isn't a weak poem in the book, but the ones that stand out demand to be read again and again, like the one ("Tiny Siren") where she finds the photo (a year before he tells her he's leaving her) of her husband's future new wife in the Whirlpool, and the one ("Poem of Thanks") where she considers "the touch of the long view" as opposed to the one of someone who is "passing through," lovingly listing the many places where they "did it": "Colleague of sand / by moonlight -- and by the beach noonlight, once, / and of straw, salt bale in a barn, and mulch / inside a garden, between the rows ..." If you want a sneak preview, I highly urge you to listen to Olds read from Stag's Leap plus a few of her earlier books, here.

At long last Seattle poet Rebecca Hoogs has a full-length collection of poetry, Self-Storage! Her poems are smart, sharp,  and sassy, with plenty of pleasing ear candy, as in (from "L'Oeuf"): "Love is a brunch and a racket. / I know it means nothing, / barely worth the oofing / before the offing, but still / I load up my basket / and watch them hatch: / chicklets of zip...".  Who wouldn't want a book with a love song to the word suck and  an accentual syllabic poem in the voice of Ariadne? Give this to someone who feels refreshed by poems that champion sound and rhyme and eschew all order of earnestness in the confessional mode.

In Bob Hicok's Elegy Owed the speaker, as always, seems to be whispering into the reader's ear at a crowded party, sharing the most intimate and sorta creepy details of his past  ("He was made to touch a corpse as a child" - from "Coming to life"), while also uttering the most utterly quirky and unexpected lines in all of contemporary poetry: "If lightning/ loved me, it would be sewn / with tongues, it would open / my mind to the sky / within the sky. " See what I mean? I'd love to meet Hicok's speaker at a holiday party as I'm deciding between the caviar with Triscuit and the guac and chips. Instead of reflecting on our teaching methods and catching each other up on our various athletic endeavors, he would turn to me and say "I've gone up the fire escape / in my brain, where everything / is a mist and a slow wet kiss ... " (from the title poem), and I would love him dearly for it. 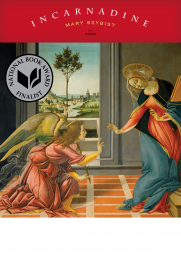 Mary Szybist's Incarnadine won the 2013 National Book Award, and for good reason. Sample some of the poems from this gorgeous book here and here. I love her work - am smitten with it. Nuff said.
Posted by Martha Silano at 11:10 AM